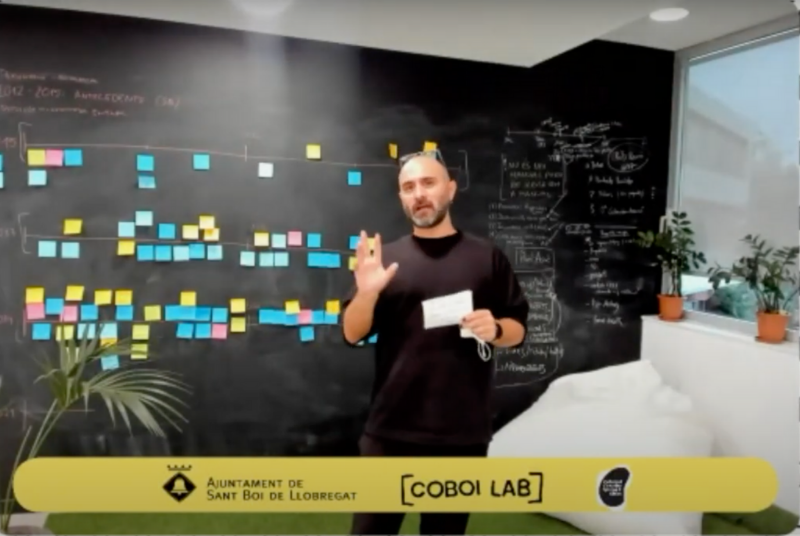 The focus of the traineeship was on the first two phases of the methodology: observation and exploration.

Background of the Traineeships

In October 2020, Coboi Lab organised the first of two Urban Lab traineeships. Using Zoom as a digital space for collaboration, the event engaged 25 participants online. The video recording is available below (in Spanish).

The aim of the traineeships led by Coboi Lab was to share a methodology to tackle social challenges as the main tool to carry out transformative projects in the city of Sant Boi de Llobregat. The intention of these events was to start generating an ecosystem of actors who are interested in generating social change in the city, both inside and outside the City Council to increase the capacity for collaboration.

The city council of Sant Boi de Llobregat has started a process to reactivate the city. The traineeship events marked the beginning of this process. Some actors who participated in the city’s pact joined the traineeships to learn how to conduct multi stakeholder processes of collaboration and co-creation. The event welcomed a variety of voices to both of the traineeships events including; public officials, technicians from Sant Boi’s city council as well as Barcelona City. People from within Coboi Lab’s network who are facilitating collaborative processes within their own context were also invited to participate.

The first part of the event focused on setting a context around what we want to achieve. This included observing the value of multi stakeholder collaboration and reducing silos between areas in the city council and different sectors in society (academia, business, culture, public administration and citizenship).

Jose Angel Carcelen is the Councillor of the City Hall of Sant Boi de Llobregat, who focuses on economic development of the city.

Michael Donaldson is the Commissioner for Digital Innovation, Electronic Administration and Good Governance. Graduated in Law from the University of Barcelona and holds a master’s degree in Public Management. From 2015 until now, he has been director of Strategic Planning and Central Services of the City of Gavà.

Raúl Olivan  is the General Director of Open Government and Social Innovation in the Government of Aragon after leading Zaragoza Activa, an ecosystem of entrepreneurship and social innovation in which almost 500 business projects were incubated. Its objective is to demonstrate that institutions can be opened from within by incorporating all the bandwidth of collective intelligence into public policies.

The second part of the traineeship took a more practical approach, which included two sessions where participants experimented with some of the tools included in the methodology, using a hypothetical societal challenge. These activities were done in small groups of 4-5 participants who worked with 4 facilitators, one for each group. To end the session, a group discussion was initiated, where the participants shared their feedback on the tools they used.