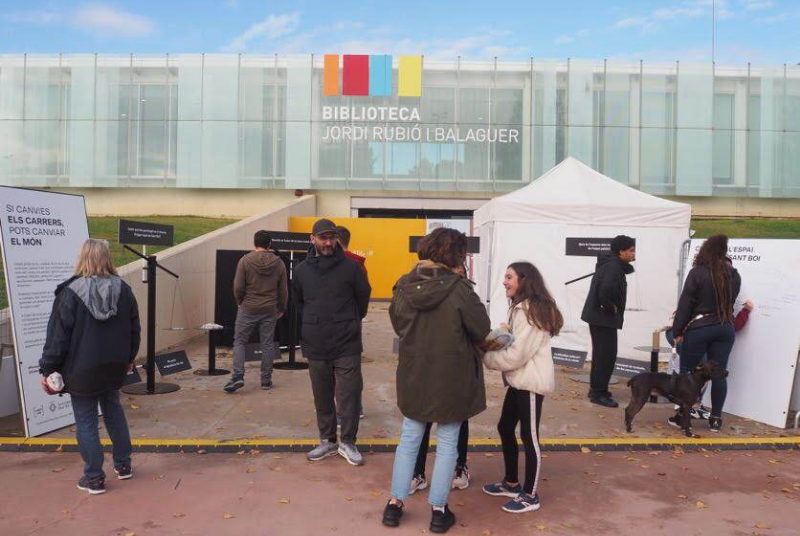 The 6 December 2019 was a special day for the locals of Sant Boi de Llobregat, Spain. Coboi Lab organised their second workshop in the shape of a celebratory 7-hour long event in coordination with the local bank holiday ‘El día de la Purísima’, also known as the Immaculate Conception.

The workshop was successful in its mission to create a network of citizens interested in participating in social innovation projects. Taking place at the public library of Sant Boi de Llobregat, the event saw an amazing attendance of 300 people who participated in presentations about Coboi Lab, the project, a survey concerning public space and active citizen participation.

Objective: to facilitate a shared and interactive space in which everyone integrates their ideas, proposals and needs regarding public space. The aim is at identifying participants who are interested in innovation in Sant Boi de Llobregat and to communicate that Coboi lab is an instrument and a space for collaboration and experimentation in the service of the community. From this, Coboi lab expects to increase the network of citizens interested in participating in the lab’s innovation processes.

Discover how important it is for citizens to influence and participate in the development and planning of public, shared spaces. How Sant Boians perceive public space and the importance of their implication on proposals to change it.

Coboi lab aim at creating a community of engaged citizens to integrate them as co-creators of our projects and initiatives, this workshop is an action that will help engage with a broader public and communicate what Coboi lab is in the street of the city.

Justification: We explore the relationship between individual and active participation.

Justification: We delve into the citizens need to design their own environment.

Justification: we define what the citizenry understands as the optimal scenario.

Participants expressed their desire to be more involved in the processes of change and design of the public and shared space. Most perceive that it is a citizen’s right to make decisions, influence and create the future of public space in the city of Sant Boi.

When asked who should have more power to change and influence the change process of public space, most said that citizens should have more voice and power to co-create and propose solutions than local businesses. In addition, most participants think that the most important aspect of public space is the power it has to create a community and its role as a relational space. This was an open, inclusive activity that brought approximately 300 participants of all ages. It was the first time Coboi lab executes an activity in a popular fair like La Purissima. The workshop was successful in helping the lab engage with a broader public and communicate what is a lab and it’s objective.